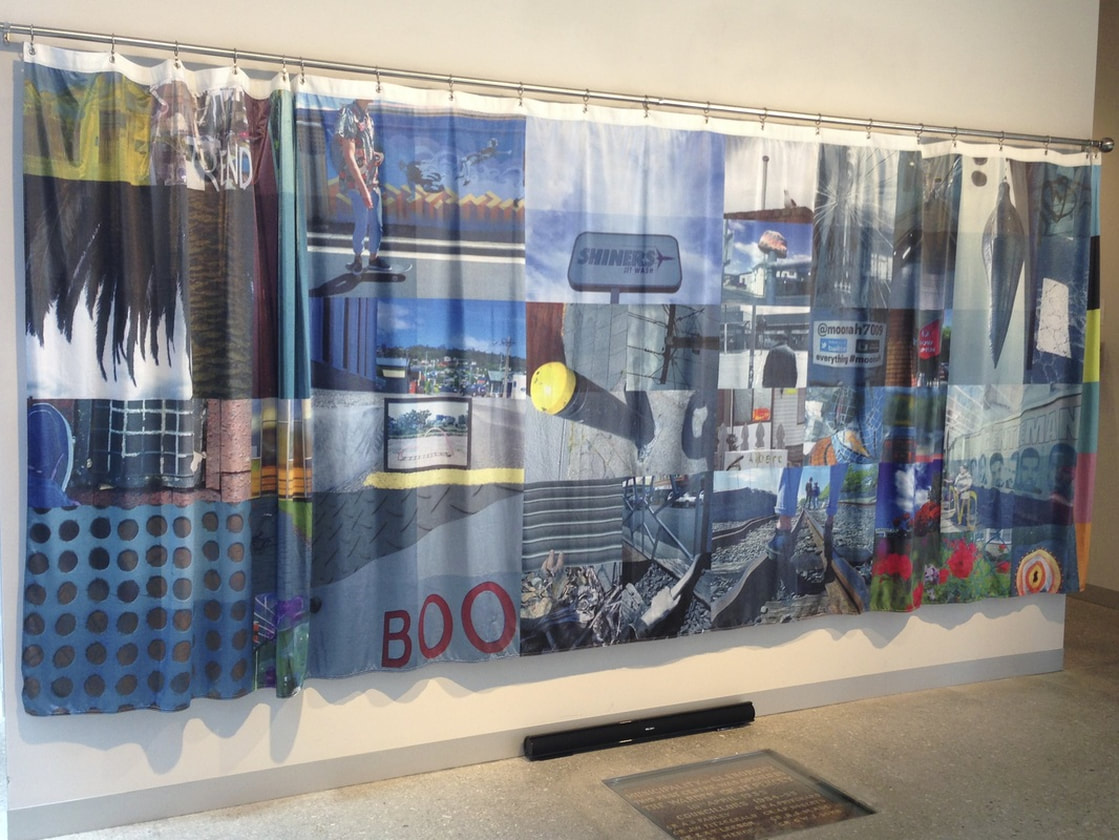 Curtain Call was an outcome of a workshop series based at Moonah Arts Centre, Glenorchy, Tasmania in late 2015, which explored experiences and perceptions of this place via walking, photography and text. Fifteen local residents of diverse cultural backgrounds and ages experimented with the inclusion of their own presence in the photographs - like a selfie but different! Sometimes this was via traces of their physical presence - such as shadows or reflections - and other times by photographing a personal object placed within the landscape.

This collaborative artwork was installed at Moonah Arts Centre, Tasmania, as part of the Glenorchy Open exhibition, February- April 2016.  It references (and hopes to contribute to obliterating!) the locally ingrained notion of the ‘Flannelette Curtain’, which attributes negative stereotypes to this place and the people who live here. According to many residents of Hobart, this ‘line’ runs along Creek Road, separating the latté drinkers on its southern side and flannelette shirt-wearers to its north. We believe this socially differentiating line is snobbish, unhelpful and simply inaccurate. This curtain comprised of multiple images of Glenorchy area taken by local residents aims to reveal nuances of life beyond the ‘curtain’.

The soundscape comprises text generated by participants from the embodied experience of walking around the area, with Situationist-inspired awareness of ‘psychogeographic’ effects. The written text was recorded spoken by the group members simultaneously to evoke the overlay of subjective and visceral observations of pedestrians in a Glenorchy street. These sounds form, in their indecipherable multiplicity, perhaps a more accurate representation of the complex social ‘fabric’ of the place than the stereotype of the Flannelette Curtain.

Curtain Call was an Art and About project as part of ARC Discovery research 'Challenging Stigma' led by sociologist Deborah Warr through Centre for Health Equity, University of Melbourne.  Gretel was employed as Artist/Research Fellow from 2014-17 and evolved a site-responsive social practice approach to challenge place-based stigma, develop a sense of belonging and inclusion within neighbourhoods and present nuanced perspectives of a place to outside audiences.  Gretel had long-term residencies in Wyndham (Victoria) and Hobart, in which she engaged groups of residents in Art and About projects reflecting upon their neighbourhoods and creating collaborative artistic outcomes.